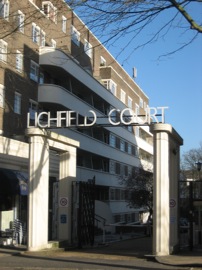 Completed in 1935, Lichfield Court consists of two Grade II Listed purpose built blocks of flats in fine Art Deco style, situated on the site of Lichfield House which was originally built in Queen Anne style.  The latter was reputedly designed by Sir Christopher Wren and built for the 1st Earl of Abergavenny and later became the palace for the Bishop of Lichfield.  In 1901, it was the home of Miss Braddon, the novelist.  The house and grounds were acquired in 1933 by Sir George Broadbridge and redeveloped into the present two blocks of flats.

The estate is located in a prime sought after location with a range of amenities including shops, cinemas, Richmond Theatre and, of course, the river Thames within easy reach.  Richmond benefits from excellent rail and District line underground services into London.  A wide range of bus services is also available.

The Company Estate Office and Porters’ Office are situated in the main lobby of the Major Block.

The buildings are surrounded by estate grounds which are a mix of gardens and unallocated parking, the Major Block boasting a decorative inner courtyard garden and pond.  Initially intended for the rental market, the flats conformed to six different types; no-alcove, one and two alcove studio flats as well as one, two and three bedroom flats, some with balconies. Flats are for residential use only and the lease expressly prohibits occupation for businesses.   However, flats may be let to tenants with prior approval from the freehold/management company, Festalfine Limited.

A private road runs through the estate, access being regulated by means of barrier and external gates.  Vehicular and pedestrian access is monitored by porters from 07.30hrs to 21.30hrs Monday to Friday and 07.30hrs to 15.30hrs on Saturday.  During the remaining hours an entry-phone system is in operation and the building covered by security firm. This provides a high level of twenty four hour security with access provision for the emergency services.

Lichfield Terrace, consisting of seventeen shops, is at ground level on Sheen Road and falls within the curtilage of Lichfield Court Estate.

Northumbria Court, a retirement home, is situated to the north of the estate and is provided with vehicular and pedestrian access via Lichfield Court.  Richmond station can be accessed by foot within minutes by a gated path running between Lichfield Court and the Quadrant access road.

Lichfield Court was completed in 1935 to an Art Deco design by George Bertram Carter. Bertram Carter trained at the Royal College of Arts and was a pupil of Sir Edwin Lutyens from 1919 to 1922. He became a member of the MARS group and was appointed Honorary Treasurer of the group in 1944.

After designing Lichfield Court, Bertram Carter designed other modernist residential buildings in London, notably Taymount Grange which was built in 1935-36.

The Lichfield Court development consists of two blocks of flats on a sloping site off Sheen Road and was originally intended for middle-income middle class residents who worked locally or travelled to London. The blocks, known as the Major and Minor Blocks, contain 152 flats and 59 flats respectively and are surrounded by estate grounds and car parking areas.

Both blocks are arranged around central courtyards with entrances to individual flats sharing a communal walkway.

The buildings were awarded Grade II listing on 27th January 2004.


At the time of its Grade II listing in 2004, the Twentieth Century Society noted: 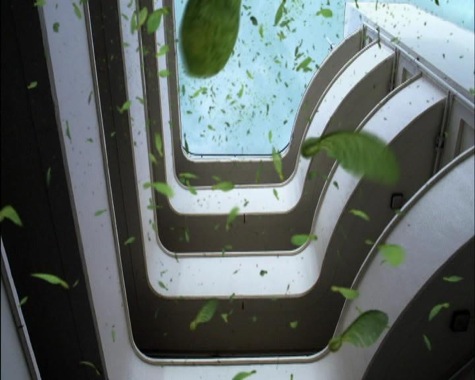 “Bertram Carter's building goes beyond the merely functional brief to create a dramatic courtyard environment with white bands of the galleries stepping forward to envelop the staircase towers. This highly stylised effect is truly unique and takes the building from being a quite standard apartment block of the era to a truly exciting new level.

“The courtyard walkways with their sculptural uniformity let the building transcend from the moderne to the modern. In this they are reminiscent of Wells Coates' Embassy Court in Brighton dating from 1934-35 with its ‘radical white bands of balconies and stair parapets'. This idea of the external walkway as access for high-rise buildings became very popular in post-war developments, and Lichfield Court can therefore be seen as an early forerunner of this design development.
Built in 1935 by Bertram Carter, the development comprises two large blocks of flats located on an irregular site off Sheen Road. The blocks themselves are arranged around courtyards and accessed from a driveway, which runs between the two buildings through a wrought iron gate.

Lichfield Court remains in excellent condition with a high level of consistent detailing throughout. The ground levels of the street frontage accommodate shop premises and there are five types of flats within. The apartment blocks were positioned to provide a southerly aspect to the largest possible number of flats and only a small proportion face north. An excellent Art Deco entrance foyer remains completely intact.

The elevations of this steel-framed structure are faced with red coloured brick from which the white-stuccoed reinforced concrete balconies are cantilevered. Lichfield Court is streamlined with these bands of white balconies alternating with fenestration curved at the corners of the blocks: highly reminiscent of the design of an ocean liner, which the architecture of this era emulated.
The balconies are an important feature of this development on both a private and a public scale: each flat, whether generously proportioned or more modest in size, has its own enclosed section arranged on the outside perimeter of the building's envelope. Perhaps more interesting for an apartment block of this date is the use of balconies as an external walkway.